So you are looking for a comparison of the two best processors? i3 8350k vs i5 8400? In order to help you choose the best processor for your computer, we recently did deep research on intel core i3 and i5 models. In this article, we have gathered the information for you to select the best model according to your gaming needs.

We are now going to talk about a processor that had already been very popular: the Intel Core i3-8350K processor.

Before the test we will have a summary of the technical characteristics of the product provided by the manufacturer: 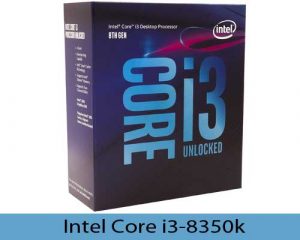 The Coffee Lake family of processors is the fourth to be based on the 14-nanometer engraving process (after Broadwell, Skylake, and Kaby Lake) and does not intend to revolutionize its world. Indeed Coffee Lake does not tangibly improve the design of the Skylake. However, it brings a lot of significant improvements that we will now discover through the mid-range processor Intel Core i3-8350K.

The Intel Core i3-8350K processor introduces quad-core technology to the Core i3 line, which previously only offered two cores. It is therefore a significant improvement for all tasks that exploit multiple cores. We are thinking in particular of photo retouching, video editing, or even programming or even 3D modeling.

During our tests, we noticed that office performance is very close to a processor like the Core i5-7600K, which is not surprising since the Kaby Lake generation processor also has four cores, and a frequency around 4 GHz. Compared to AMD’s Ryzen offerings, the i3-8350K processor offers performance comparable to Ryzen 5 1500X and 1600, which are offered at similar prices, an excellent point for Intel who wanted to catch up.

This Intel processor is making a lot of progress in video games. It offers a fully satisfying gaming experience at 1080p 60fps when paired with a recent graphics card. The influence of the CPU on games is always dependent on the graphics cards so we always recommend choosing the latter.

The Core i3-8350K processor seems to do particularly well for video games that use the processor a lot, like Civilization VI for example.

As the suffix K indicates, the i3-8350K has an unlocked multiplier, which makes it accessible to overclocking and should make it an attractive processor for those who want to start practicing.

It is surprising to note that the processor does not offer Turbo Boost, the CPU will therefore always operate at 4 GHz unless it is overclocked. As much as this choice may seem curious, it also guarantees a more predictable level of performance.

The 8th generation of Core processors, Coffee Lake for friends, does not really change the fundamentals: Intel still uses a 14nm burning process again and again, while retaining a CPU architecture identical to the previous one.

However, performance has increased significantly, thanks to the addition of two additional cores to the entire range. Enough to make them formidable competitors to the Ryzen of AMD.

This model has 6 cores, but does not have Hyper-threading; it, therefore, displays only 6 threads on its counter. The base frequency is 2.8 GHz and it is possible to reach 4.0 GHz on two cores in certain cases.

The 8600K has the distinction of going high in frequency, with an unlocked coefficient which makes this processor the best choice for overclockers.

Professional and Gamming Use

The Core i5-8400 is rather suitable for professional use, not only for video games, but it suffers from its lack of Hyper-Threading in certain 3D rendering applications, and therefore loses its interest compared to the Ryzen 5 1600X.

In view of the technical specifications of the i5-8400, it is easy to consider it as an i7-8700K without overclocking capacity, with lowered frequencies, and without support for hyperthreading.

On video game applications, the i5-8400 will systematically arrive in front of an i7-7700K, and will often be neck and neck with its big brother, the i7-8700K. The impact of hyper-threading plays little role in this context, as does the drop in frequency, which is much less important on modern technology.

And of course, you guessed it: the discrepancies observed become impressive when we compare the Coffee Lake generation i5 to the Kaby Lake generation i5… On an overclocked GTX 1080, we go from 145 FPS to 186 FPS on Battlefield 1, from 135 to 179 FPS on The Witcher 3, or from 115 FPS to 155 FPS on Gears of War 4. Same music when you oppose i5 8400 and Ryzen 5: the Intel CPU offers excellent performance compared to its competitors.

At rest, there are no big differences between the new generation processors. Ryzen 5 consumes a little more because of their higher rest frequency.

In a conventional use combining 2D and 3D occasional use, the consumption of the processors reflects the performance gain obtained. Here again, the Core i5-8400 does not reserve any surprises and adopts the same behavior as the 8600K.

The Core i5 can easily be cooled by air or with an all-in-one water-cooling solution, despite the poor quality thermal paste between the die and the heat spreader. Even if the AVX instructions heat up the processor particularly, most coolers will be able to take the hit.